I was recently having a conversation with someone about the impact of their plan for their SaaS product. It was a relatively small impact when framed the way they were looking at it, but didn’t include a very holistic view of things. The solution to this is the Pufferfish. The execution of the Pufferfish is as follows*:

It’s worked for me several times. Why? I think it’s a mental buffer overflow. You’ve thrown a lot of numbers around and they’ve come to the conclusion that it’s a very bad idea. This tactic obviously needs to be used judiciously to prevent them from becoming desensitized to it, but it can be hugely instrumental in select cases.

What do you think of the pufferfish? 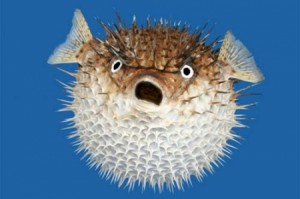 *All example numbers are completely fictional and used for illustrative purposes only.

This entry was posted in Uncategorized. Bookmark the permalink.