I curse a lot in this race report. Reader beware.

Thank you to my fellow FURBies, the volunteers, and Vicki for all of your help making this happen.

Prep
I put in all of the work that I could to beat my 100k PR on this race. Lots and lots of bridge work, trail time, altitude training, HIIT, mountain trail training, etc, etc. At the end of the day it wasn’t in the cards, but I raced with skill and calm during horrible conditions and I’m good with that.

This race really started for me about 7 days before hand. I was flying in on Thursday to San Antonio and staying not very far away from Kerville, Texas. The weather went from nice, easy to handle for a Floridian to 30 degrees with ice pellets expected. I can handle rain, I can handle cold. I’ve never had to handle both at the same time. I’d also spent a decent part of the night of Long Haul 2014 helping warm up runners who’d gotten too cold *really* quickly. It wasn’t event raining when all of this happened.

Ok, no worries. I’m a Florida runner, so I have almost no cold weather running gear. I ordered some additional shoes. I ordered some running pants; I’ve never run in cold enough weather to justify purchasing a pair. I got a neck gaiter and decided to make this run with my UDT wasp with “what if” stuff in case I was injured and couldn’t generate enough heat through motion. Many of my fellow FUR’s (Florida Ultra Runners) reached out with tips, words of encouragement, and offers of equipment.

Then the forcast started calling for rain before the race. I’d heard about how bad the trails can get at Bandera. My spare shoes arrived, and they were the wrong size. It’s Wednesday, and I leave in less than 24 hours. I started freaking out more than a little, and for about an hour I was seriously considering not doing this race. 100k, with no crew, pacers, in the rain, mud, cold, sotol and hills. Who the fuck am I kidding? If it had happened during a race I would have caught my mental change quicker. But I caught it, and just like that, I asked myself that question which always changes a race for me “Are you going to do what is necessary?” The answer is always yes. In my very limited experience, I’ve never had to ask this question before a race. From then on, when something sucked, this was my attitude: 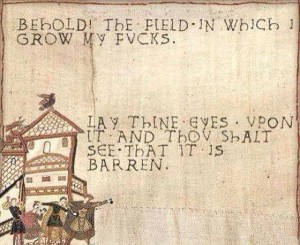 With the ice I changed plans and ended up spending the evening at a dude ranch a few miles from the race start. It sleeted all night long, but let up when I went to leave.. I immediately fell on my ass, and almost went down the two stories of outside stairs. They were covered in ice and my technical shoes couldn’t grip. I carefully slid down the stairs with my 50 pound luggge and gear.

When I arrived I parked so that I’d be able to change in private in the car and set the car up so that I could hop in, crank the hot air, and get my socks and clothes changed quickly. I wanted to ensure that I wouldn’t get cold while changing socks and have to drop. I laid everything out in order, so that I wouldn’t have to think, just go from left to right, top to bottom.

Loop 1
It rained and sleeted while I set this, and rained and sprinkled the rest of the day. The race started with more people than I’ve ever seen at an ultra; even for the crappy weather there were probably 500 people running, with the 100k people in the lead and the 50k and 25k people taken a different route. I was wearing too much and let myself heat up too much. It quickly turned into single track, up and down the side of several hills. I was frustrated at this point with walking down hills, and took the opportunity to shed clothes. I ran the rest of the day in a pPatagoniarain shell, my FUR shirt, and a layer of running pants, shorts. My gloves went on only when my fingers would burn.

The trail at this stage was wobbly, crumbly, ice covered limestone. Surrounding the trail was sotol, which has sharp edges, image a paper cut machine. Sotol looks like this: 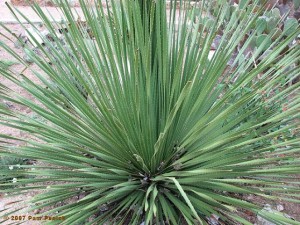 Frequently you’d need to run through it as well. Those pants were coming in handy.I focused on this.

After about 10 miles of mostly single track it opened up and I was able to run at my own pace. But at this stage the mud really started to pick up. It wasn’t regular mud, because it would stick to your shoe, and was almost always immediately followed by sand, and straw, which would layer onto your shoes. I’m not exaggerating when it felt like I was running with 10 pounds of mud on my shoes. Here are some pictures from other runners showing how bad it really was: 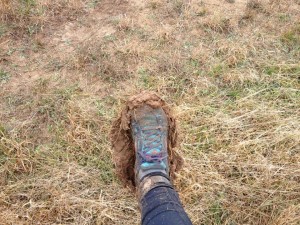 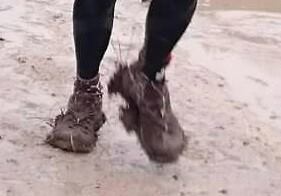 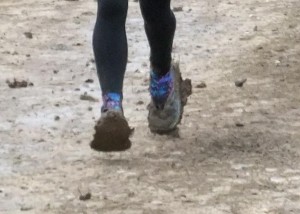 This mud made areas where you should be able to make good time tortuous. I was running only by feel, using my garmin as a watch only, but I was keeping warm, and my nutritoin plan was working. I focused on this. 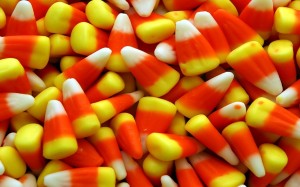 Fuck It Bucket Mk II
I’ve written about how I used the Fuck It Bucket at Burning River to ensure proper nutrition and make I didn’t get too blue. I’d been warned that I’d need to increase my calorie intake during the race. I normally eat a ketogenic diet, but when I race I fuel with lots of carbs. In looking for something that was very calorically dense, no muss, no fuss and something I actually wanted to consume for hours on end I ended up with Candy Corn. They’re basically High Fructose Corn Syrup made solid, low residue, and I knew that I wouldn’t get into any osmoality issues with them and soda from the race course. I frequently say there is no such thing as a silver bullet, just lots of lead ones. These were my lead bullets, and I ate 6-8 every fifteen minutes like clockwork for the duration of the race. This put me at 260 calories an hour from them alone. A few times I felt a little blue, and I reached into my giant baggie of these and had a few extra. Picked me right up. Mk II > Mk I.

Caffeine-I also slammed caffeine the entire race, starting with two cups of coke at each AS the first loop, and two cups of Mountain Dew at each AS the second loop. I’d tapered from caffeine, so it was more effective than normal.

½ cup broth, ½ cup mashed potatoes- This is heaven. someone in lodge AS asked for it, it sounded REALLY good, and so I had two cups of this at each AS as well. It’s low residue, hi carb, hi electrolyte, has some fat, and is really my favorite race food now. You should try it some time =)
Malt Vinegar – During the first loop, during a fairly tough hill I got a massive cramp on my abductor. I’d been having twinges of my calves, but this came out of no where and was threatening to put me on the ground. I had a little toolkit of things to help with stomach, etc, and pulled out a thing of malted vinegar. I’d done some research into various studies and this was supposed to be the common link between a few anti cramp things. I opened it and when the smell hit my nose I CRAVED it. I swished it in my mouth and gargled it three times, and then spit it out. Almost immediately the cramps went away. I used another on the trail, and then once more in my car while changing my socks. After swallowing it I did have some stomach upset but ginger ale fixed this.

I pushed hard at every chance I could during this loop. But I rolled into the end of the loop and the clock read something like 6:50. I went to the car and spent 30 or so minutes clearning my feet, letting them dry out, then putting back on the shoes. grabbed food at the AS and then checked the clock before the start of the second loop; 7:22. I needed 16 hours to qualify for WS. With the sun setting soon, that’s not good odds. Time to make it happen.
Loop 2
There weren’t as many people on the trail, so I could run a comfortable pace up the single track, bombing down them. I put in my ear buds, they have a special feature that helps you hear your surroundings and I’m racing the daylight, knowing I’ll slow down once the sun sets and I may not be able to get in under 16.

I get time hacks at every aid station a little more under the cutoff, a little more. I’m able to push as hard as I want now, and I do. I run the uphills until I’m gasping and power walk for ten breaths before running again. As the sun is setting I’m at ~20 miles to go.

Running at night with a headlamp pulls you into it’s cocoon of light, with the rain and mud I went further inside. I’m pouring steam now, breathing out the side of my mouth because the fog threatens to completely block my headlamp, using my handlamp to look forward on the trail as I bomb down after hill after hill.

I come to cross roads aid station about 15 miles out, and get a time hack. I ask what the cutoff for Western States is and they tell me it’s 17 hours this year. I’ve got it in the bag. Just keep going.

I think maybe because I had some buffer time, and tools to fix most problems, this compelled me to run faster. I chased headlamps like a child chasing fireflys through the night.Runners on the three sisters hills stars in the night. I howled and yipped and gave chase. I could taste the finish. The hills, the mud, the fog, the rain, the ice, the rocks, the cold don’t exist. My breathing, my heart beat consume my universe as I glide down the trail.

The lights from crossroads AS is jolting and I crack a few jokes about feeling like Oliver Twist wanting “more” and quickly leave. The rest of the loop is a blur, and I finally see the end, and two more headlamps.

I’m sprinting through the slippery mud straining to catch two more fireflys, but can’t reach them in time, and finish in 14:42:48, nine seconds after them.

I feel like this race was my penance for my sins at Burning River, my multiple mistakes, and horrible showing. I was completely dialed in for this entire race, before the start, all the way to the finish.

This entry was posted in Uncategorized. Bookmark the permalink.